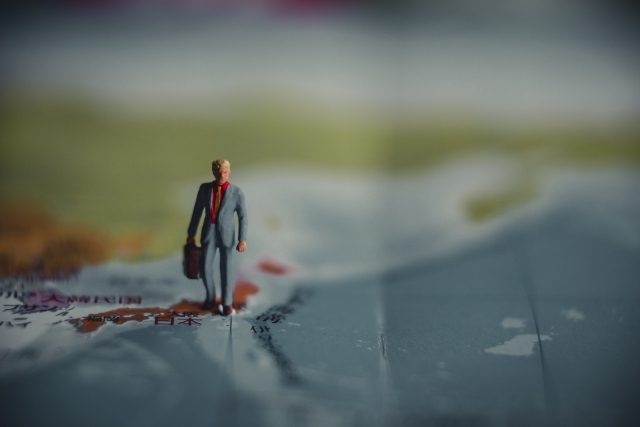 Income tax is levied on an individual’s “income”.
The range of taxable income depends on whether the individual is “resident” or “non-resident” (see this blog for more information).
Nationality and resident status may be involved in the determination of resident/non-resident.
In addition, nationality and resident status may concern taxation/exemption requirements for each tax regime.
Here are some examples.

“Resident” under the Income Tax Act means an individual who has an address in Japan or has a residence for one year or more (Income Tax Act Article 2 item 3). And what “having the address” means should be judged by every single case.
Having said so, the judgment would be quite difficult if we have no standardized rule. So the following “presumption provisions” have been placed in the Income Tax Law Enforcement Order to accommodate to practice difficulties.

(Person presumed to have an address in Japan)
Article 14   If an individual who has become to reside in Japan falls under any of the following, such a person is presumed to have an address in Japan.
(i) The person engages in an occupation that normally requires living in the country for at least one year continuously.
(ii) There is a fact that the person is a Japanese national and lives together with the spouse or other relatives in the country. Or There are sufficient facts to presume that the person will continue to live in Japan for more than a year in light of the occupation, the existence of assets in the country.

(Person presumed not to have an address in Japan)
Article 15  If an individual who has become to reside abroad falls under any of the following, such a person is presumed to have no address in Japan.
(i) The person engages in an occupation that normally requires living outside the country for at least one year continuously.
(ii) There is a fact that the person is a foreign national or is permitted permanent residency in another country by foreign law and the person has no spouse or other relatives who make a living in Japan. Or, there are enough facts to presume that the person will not come back to reside mainly in Japan in light of the occupation, the existence of assets in the country.

In this way, the existence of a domestic address is presumed based on facts such as whether you have Japanese nationality, foreign nationality, or permission to live permanently in a foreign country.
“presume” means “assume a fact as the law assumed”, so if you can prove the fact that “it’s not really the case”, you can rebut it.

Civil servants who cannot be non-residents

(Distinction between resident and non-resident)
Article 3  National public servants or local public servants (excluding those who do not have Japanese nationality and other persons specified by Cabinet Order) shall be deemed to have an address in Japan for the Income Tax Law purposes (except Article 10 (tax exemption for interest on small deposits of persons with disabilities), Article 15 (place for tax payment), and Article 16 (special provisions for a place for tax payment)) even during the period when they do not have an address in Japan.

I was wondering why it was handled like this, but I have not found the rationale yet.
I supposed it is because their salary is paid out from taxes, but it cannot be the reason why income other than salary (especially foreign-sourced income) also shall be taxed in Japan.
It perhaps may be based on the “reciprocity” described later, I thought, but it would be wrong because neither Article 3 of the Income Tax Act nor Article 13 of the Income Tax Act Enforcement Order touches on reciprocity.
Does anyone know the correct answer?

The salaries of employees of foreign governments (including foreign local governments) and certain international organizations shall not be subject to the income tax (Income Tax Law, Article 9, Paragraph 1, Item 8).
However, those who have Japanese nationality and those who do not have Japanese nationality but who have permanent residence permission in Japan (including those who are allowed to stay for a long period of time) are to be taxed (Income tax Law Enforcement Order Article 24).

In addition, such tax exemption measures for salaries of foreign government employees are granted under a reciprocal condition of “provided that that country does not tax the salaries received by the employees of the national or local government of Japan who work in that country and who satisfy the requirements stipulated by the relevant government ordinance” (Income Tax Law, Article 9, Paragraph 1, Item 8 in parentheses). Accordingly, it is necessary to confirm whether the salary of Japanese civil servants in the other country is exempted or not.

Regarding financial assets such as securities and derivatives, there is a “special taxation on capital gains for who is relocating abroad” (Income Tax Law, Article 60-2).
“relocating abroad” means that you will become to neither have an address nor residence in Japan.
This special taxation to impose income tax on the unrealized gains on securities and derivatives that a resident possesses when he/she “relocate abroad”, that is when he/she will become a non-resident. It is sometimes called “Exit Tax”.

In principle, income tax is levied on the gain on sale (capital gains) of financial assets when they are actually sold or settled.
Under this principle, in some cases, the capital gains of financial assets transferred or settled by non-residents sometimes may not be taxed in Japan. Knowing such a “loop-hole”, some wealthy people had relocated abroad to avoid Japanese capital gain tax on their realized gain.
To deal with such moves, this special taxation measure was introduced by the 2015 tax reform.

There was a lot of controversy at the time of introduction because it is an aggressive measure that taxes on unrealized gains as if it had been realized despite the fact it was not actually transferred or settled.
So, for the purpose of preventing tax avoidance by the wealthy, the case where the financial assets held when leaving the country is less than 100 million yen has been excluded from this taxation.
Also, if he/she who happened to become a resident is taxed in Japan for the unrealized gain derived from the financial products that had been held long before he/she became a resident of Japan, it could cause international multiple taxations. For such reason, the case where the aggregated period of having an address/residence in the country is 5 years or less for the recent 10 years also has been excluded from the taxation.

It seemed that these would relieve the complaints to the special taxation measure, but foreigners who have lived in Japan for more than five years, especially expatriates of foreign firms had expressed strong dissatisfaction.
These people are assigned to Japan for the business of their employers and they are supposed to return to their home countries eventually, so taxation on unrealized gain would be inevitable and unbearable.
Some people said that they would not be able to work thoroughly in Japan if they were bound by the rule of “within 5 years or less for the 10 years”.
Therefore, for this special taxation purposes, the period with a resident status listed in Schedule 1 of the Immigration Control Act (diplomat, professor, artist, business/management, etc.) has been excluded from the period having an address or residence in Japan (Income Tax Law Enforcement Order Article 170, Paragraph 3, Item 1).
For this additional relief measure, foreign nationals staying in Japan with a business visa became less likely to be subject to “Exit Tax”.

In addition, if there is a period with a resident status listed in Schedule 2 of the Immigration Control Act (permanent resident, spouse of permanent resident, long-term resident, etc.), that period will also be excluded from the period having an address or residence in Japan (Income Tax Law Enforcement Order, 2015 Amendment Supplementary Provisions, Article 8, Paragraph 2).
By virtue of this provision, foreign nationals who have stayed in Japan for a long time on a spouse visa, etc. were able to relocate abroad without being subject to the “exit tax” until June 30, 2020.

Only a minority of people are aware that there are differences in the taxation of Exit Tax depending on the type of resident status.
If you are pondering a change of your resident status from a business visa (resident status in the Schedule 1 of the Immigration Control Act) to a spouse visa (in Schedule 2) upon marriage to a Japanese person, and have financial products of more than 100 million yen, you would better take it into the consideration whether or not you will leave the country in the next 5 years.