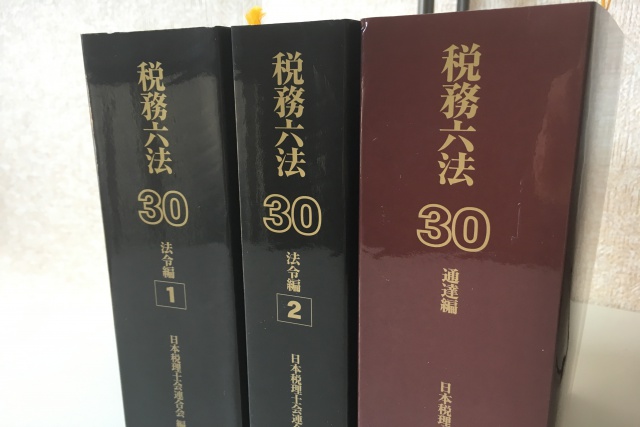 Have you ever been convinced to accept opinion of a tax auditor who is saying “According to this circular notice …” or “As defined in the circular notices”?
However, in reality, even if a taxpayer does not obey the “circular notice”, it does not mean that he / she violated the “law”.

First of all, what is the difference between “law” and “circular notice”?
Before that we are going down a little.
Tax accountants use “Zeimu Roppou (six tax laws)” book as a work tool.
In the past it was a two-part book of “Laws” and “Circular Notices” , as the time goes, both become thicker and the “Laws” edition becomes a two-part volume then it is now a total of three volumes.
Now a days, we can browse the tax laws on the Internet, the tax circular notice on the website of the National Tax Agency.
However , it seems that this three-volume book is still handy and welcomed to many tax accountant firms.
I also use the web version when I want to do quick research or search by keywords, but if I want to do something thoroughly, I will open the three-part volume.

“Law” becomes legal binding only after being discussed and approved at the Diet where the representatives of citizens gather.
Because the Diet is the only law-making organ of Japan, any “law” not approved by the diet is invalid.
“Cabinet order” is an order enacted by the Cabinet to enforce the law in accordance with specific provision in the law passed by the Diet.
“Ministerial ordinance” is an order enacted by ministers of the respective ministries in order to enforce the laws and cabinet orders.
These “law”, “cabinet order” and “ministerial ordinance” are collectively called “laws”.
There are 49 laws the “Six tax laws” in total.
By the way, “regulations” deliberated and approved by local councils are also included in “laws” as long as they do not conflict with the provisions of “laws”.

What is “circular notices”?

“Notice” is a type of form that each minister, the chief of each committee and each director gives order or guidance on its affairs under the jurisdiction to the various agencies and staff in charge.
In other words, it is a written directive from one of the top government officials saying “as I have decided to … about now, you guys my subordinates, do so!”
There are many things concerning the interpretation and enforcement policy of laws, which have the nature of so-called administrative rules, and formally do not directly bind citizens or courts (per Glossary for law study, 4th Edition,  Yuhikaku).
In other words, the national tax circular notice is an administrative rule that the Commissioner of the National Tax Agency gives to his subordinates, the local tax circular notice is the administrative rule that the Minister of Public Management, Home Affairs, Posts and Telecommunications displays the interpretation and enforcement policy of tax laws addressed to governors and mayors, i.e., the heads of local governments.
Since tax auditors can not ignore the circular notices issued by their “big boss”, it is quite natural to explain their opinion in line with the tax circular notice during the tax audit.

Also, administrative agencies that have received complaints against tax assessment can not ignore circular notice from the senior agency, so judgment on whether to accept or dismiss the complaint is bound by the circular notice.
Regarding national taxes, if there is any dissatisfaction with the results of the complaint against the tax assessment, the taxpayer can further appeal to an agency separate from the tax authority named “National Tax Tribunal”.
The National Tax Tribunal is a separate independent agency from other tax authorities like the National Taxation Bureau and the Tax Office, but since the Judges at the tribunal are also officials supervised by the Commissioner of NTA, they are also bound by the national tax circular notice.

Outside of the administration is out of the scope

If an appeal against the Tax Office or the Tribunal has been dismissed, taxpayer can take it to court that the assessment by the NTA  or local government violates the law.
The court belongs to the jurisdiction of the country (the judicature) completely separated from the administration (the executive), so it is not bound to the circular notices.
Neither appealing taxpayers are bound to obligation as a matter of course.
Therefore, taxpayer can interpret the law on its own, arguing that his judgment meets the purpose of laws and regulations, and the court also has its own. The court can freely decide which claim of a taxpayer or tax authority is right.
However, since a taxpayer is not allowed to claims that they misunderstand or deviate the purpose of laws and ordinances, it is not possible for any taxpayer to assert anything, and the court can not completely judge free.
As a result, it is often the conclusion that the interpretation in circular notice is respected, but that is not because the court made a judgment in accordance with the order, but it just happened that the views agreed.

***
Tax accountants will refer to circular notices in order to know the way of taxation.
Some tax accountants are influenced too much by circular notice and become of opinion as if they are working for the tax authority rather than taxpyers.
I will be careful with reasonable scrutiny not to do so either.