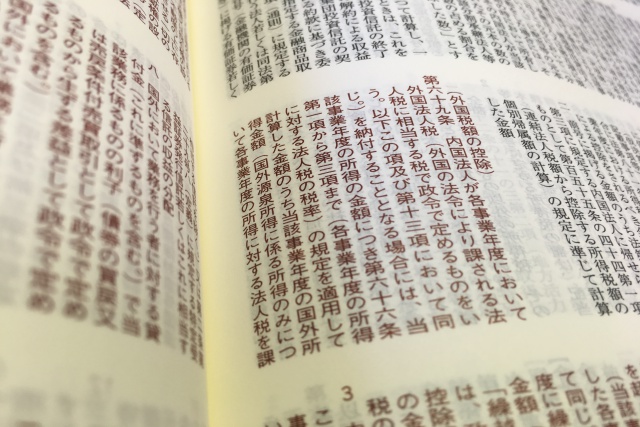 “Foreign Tax Credit” sometimes appears in my blogs up to now.
It is a tax system involved in commerce, making or accepting investment to or from foreign businesses.

First of all, let me talk a bit about the international double taxation briefly mentioned in the recent blog “Domestic corporation and foreign corporation“.
In Japan, income tax and corporation tax are imposed income earned by natural personal and corporation respectively.
Tax names may differ depending on the country, but those income taxes are common tax on this globe.

There are some countries having no income tax nor corporation tax such as Panama and the Bahamas that recently became controversial due to “Panama Papers” and “Bahamas Papers”.
Such country or region where there is no burden of income tax or extremely low if any is called as “Tax Haven”.
It is not tax “heaven”. Just in case.

If a person or corporation in Japan earns income abroad by doing business in that foreign country, income tax may be taxed in that country.
From a foreign country perspective, a Japanese person and corporation are a “non-resident” and a “foreign corporation”.
How far and how to impose income tax on income of non-residents and foreign corporations will follow the provisions of the tax laws of each country, but most countries want to tax passive income (such as interest, dividends etc.) at the very least and capital gains generated in their own countries.
Regarding business income, it is a recent trend to tax incomes attributable to business conducted through PE (Permanent Establishment) in the country (Japanese recently followed such trend, see blog “Domestic corporations and foreign corporations“).

On the other hand, from the perspective of Japan, a Japanese person and corporation are a “resident” and a “domestic corporation”.
As for non-residents and domestic corporations, Japan taxes “worldwide income” including “foreign source income” earned abroad.
This means that both Japan and the foreign country can tax the same passive income, capital gains earned in foreign countries and the same business income earned by overseas branch in the foreign country, if any.
In this way, the state in which Japan and foreign income taxes are imposed on the same income is called “international double taxation”.

How to eliminate international double taxation

So, what is the consequence of the double taxation?
The way of relief varies from country to country but in countries that adopt the worldwide income taxation system, it is common to try to eliminate or ease double taxation by either “foreign tax credit” or “foreign income exclusion”.

The “Foreign Tax Credit” method is claiming of tax credit for foreign income tax paid in a foreign country from its own income tax on worldwide income.
This is an adjust of tax due amount (tax burden) in the home country.

On the other hand, the “foreign income exclusion” method is a way to give up taxation in the home country by excluding foreign source income from the worldwide income.
This is an adjustment at the level of taxable income (tax base).

These two methods have different view on tax rate difference between the home and foreign countries.
The difference will appear in the extreme cases as shown below.

In the above, where do you think double taxation is occurring?

Both methods have pros and cons.
FTC allows the home country to reserve its own taxing power, so it is seemingly advantageous to the home country.
However, unconditional FTC may create room for taxpayers to offset tax burdens in high and low tax jurisdictions then result in the erosion of the taxing power.
On the other hand, foreign income exclusion method is simpler since it can completely eliminate duplication at tax base level, but it may create loophole at tax due amount level because of tax rate difference.

A compromise in Japan

Japan adapts FTC as the principle method but apply the foreign source income exclusion method to particular purposes as necessary.
In the past, both income tax and corporation tax adopted only FTC.
However, now domestic corporations are allowed to exclude 95% of dividends from overseas subsidiaries from the worldwide income.
Instead, the system called “indirect foreign tax credit” has been abolished.
Indirect foreign tax credit is allowing a Japanese parent company to credits foreign income taxes paid by its overseas subsidiaries from its own corporation tax due amount in the home country.
This was a way to eliminate the double taxation of foreign taxes on the subsidiaries’ pre-tax income and Japanese corporation tax on dividends (after foreign tax) received by the parent company.
Japan had been granting Japanese parent companies the indirect FTC deeming that the parent company indirectly paid foreign income taxes through its subsidiaries.
However it is also fact that many conditions for indirect FTC had been an obstacle for complete elimination of the double taxation.
It seems that quite a few “Corporate Japan” suspended dividends from offshore subsidiaries due to that reason, and the government finally decided the fundamental change to the simpler income exclusion method from the complex FTC for the policy reason.

The foreign tax credit system in Japan, especially for corporation tax purpose, is quite complicated.
As mentioned earlier, if unconditional FTC is granted, it may be abused for “excessive tax saving” which deviates from the original purpose of FTC, elimination of double taxation.
The series of revisions have been made in order to make up for such drawbacks but the scope of foreign taxes eligible for FTC and the calculation rule to limit entire FTC amount became more complicated.
Because the parameters for FTC calculation consist of many variable factors such as worldwide income, foreign source income, corporation tax due amount etc., it is extremely difficult to estimate how much FTC you can claim for a year.
From the tax planning perspective, I expect that the change from FTC to foreign income exclusion gives taxpayers more predictability of tax implication on repatriation from offshore subsidiaries.

***
About 30 years ago, I was in charge of calculating the FTC limitation in a Japanese company.
However, as I was still a newcomer in that function and (before that) I did not fully understand basics of corporation tax, even just gathering information and running the calculation as instructed from my boss were really tough job.
We had created a massive, large and complex spreadsheet to handle many divergences and convergences of calculation based on possible scenarios. That was like a puzzle.
Because it was too messy, we launched a project aiming development of dedicated EDP system.
However, the project was canceled as we had used up the budget for just preliminary discussion with external consultant.
That was a bit painful memory about FTC.